Think of it as the online home for misadventure. Stories about the wheels coming off and what happened next. Cultural gaffes. Cautionary Tales. Submit them, especially if they’re funny. Make them compelling. (And yes, make them true, or risk the lash of karmic whips). This is the place for off-the-road tales of the outlandish, the ridiculous, and the embarrassing. Basically everything that daily life is not. Snapshots, videos, links, cartoons, postcards all welcome. We can use your name, or not. Your call. And Happy Trails!

It’s a rare film about haute cuisine that manages to come down to Earth and stir deep emotions, too; Big Night is an easy exception, but there are many more misses than hits in the ouevre. And great documentaries about food are rarer still. So I was pleased to see the excellent documentary LE CIRQUE: A TABLE IN HEAVEN on the schedule for HBO on Monday, December 29th. This is a great one to watch at home over Christmas break, and you’ll want a good bottle of red wine to go with it.

Completed in 2006, the film, which debuted at IFC’s Stranger Than Fiction series in April of 2007, documents the rise-and-fall-and-rise-again of restaurateur Sirio Maccioni and his famed eatery, Le Cirque, once the most celebrated restaurant in New York. Catering to celebrities, Presidents, and, famously—thanks to Sirio’s legendary hospitality—seemingly anyone who walked in the door, Le Cirque became a symbol of the good life, dreams achieved, abbondanza.

The film opens with scenes of Le Cirque 2000’s heyday at the Palace, when Henry Kissinger was a regular, and jumps to its closing in 2004, beset by the cold financial realities of Post 9/11 New York. Much of the rest of the film depicts the fraught lead up to its glittery reopening 2006, on East 58th street, and the internecine conflicts among Maccioni and his three sons that tear at the very fabric of the family. And then there’s the bruising two-star review from Frank Bruni after the party’s over, since upgraded.

END_OF_DOCUMENT_TOKEN_TO_BE_REPLACED 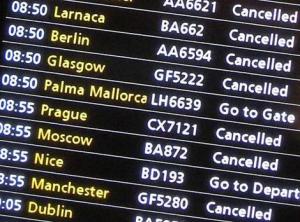 From the first page of the recent and much-lauded Jonny Miles debut novel “Dear American Airlines” (Houghton Mifflin) any weary traveler worth his industrial-strength earplugs will surely nod in baleful agreement with Miles’ assessment of the scabrous conditions considered normal in American commercial aviation. Apparently, some recent AA passengers didn’t get the memo (read: everybody loses) and decided to fight back. Which, in keeping with the way things go these days, backfired. But at least they tried. I was Miles’ researcher/fact-checker at Men’s Journal for a couple of years, which was a pleasure, especially working on one non-fiction ode to New Orleans bars in all their decadent glory. Catch him reading from his new book this Monday night the 14th at the Half King. I’ll be there. RELATED: Vicarious air rage was never so therapeutic nor generously rewarding. Buy the book.

On this flickr set, a photographer named Ken Ohyama captures some incredible images of what might at first seem incredibly boring — highway interchanges. Shot mostly by night, these eerie, desolate asphalt and concrete spans take on mesmerizing, fantastical and sometimes even organic forms. [Thanks, Tommy]

Last night I spent a memorable evening at The Half King, convened to honor Hunter S. Thompson, who needs no introduction. (Well, if we must…) My friend Corey Seymour was on hand to read from GONZO: THE LIFE OF HUNTER S. THOMPSON (Little, Brown),  his definitive oral history of the late, great hellraiser. Scores of Wenner Media alumni were on hand (present company included), crammed tightly into the Half King’s low-lit back room. Seymour, joined on stage by various former associates on the Hunter beat — otherwise known as Rolling Stone Magazine’s National Affairs Desk — recounted some highlights of his job as Thompson’s official minder at the magazine, each more unhinged, extralegal, and hilarious than the last.  END_OF_DOCUMENT_TOKEN_TO_BE_REPLACED

Oregon chef has his own Big Night at New York gala from the Portland Oregonian FOODday section today, May 15, 2007   Park Kitchen‘s Scott Dolich didn’t win a Beard award, but that didn’t stop his revelry -Tuesday, May 15, 2007CHRISTIAN DeBENEDETTINEW YORK CITY — For Scott Dolich, chef of Portland’s Park Kitchen, the night really began with a camera flash. Not from the paparazzi lining the velvet ropes (those would come moments later) but from his own, as the nominee for the James Beard Foundation award for best chef in the Northwest snapped a shot of his 5-year-old daughter, Maddie, on her very first red carpet walk.”Actually, the night began with me getting a bit carsick as I tried to tie my own bow tie using directions I printed off the Internet,” Dolich later joked.Tricky formalwear notwithstanding, there was much to be excited about.  END_OF_DOCUMENT_TOKEN_TO_BE_REPLACED